Game 7 last night between the Detroit Red Wings and the Pheonix Coyotes was a boring blowout except for this one amazing goal by Vernon Fiddler. In a faceoff against Pavel Daytsuk, just to the right of Howard, Fiddler manages to smack the puck right into the net before even a second ticks off the clock.

I was reminded of two things. First, Jimmy Howard might earn rookie-of-the-year but he is in way over his head as the starting goalie for the Wings. I don't expect the Wings to last much longer this season with Howard in the net.

Second, I recalled the awesome goal by Shae Weber in the 2010 Olympic games. Playing for Team Canada against Germany, Weber blasted one so hard it went through the net, leaving a scar on the nylon. Play continued for several seconds before officials were able to review the tape and declare it a goal. 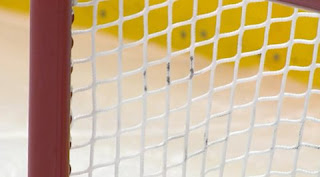 I'd never seen a goal through the net before but Weber's shots have been clocked at over 103 MPH.

During the same Olympics, Finland scored a "goal" against Team USA the opposite way. The puck snuck through the side of the net and landed behind the goalie. The refs incorrectly assumed it had passed the goalie and gave Finland a point.

I also found this compilation of impressive NHL goals.
Posted by William Frantz at 11:34 PM